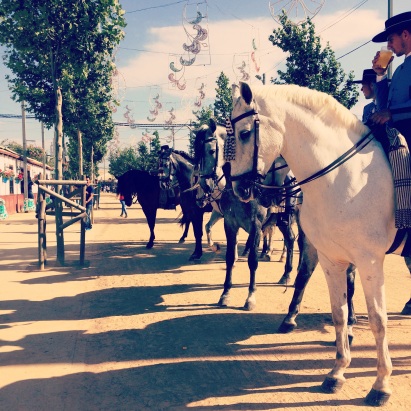 I love horses. As a child, I was a classic “horse” girl, subscribing to all those magazines like Young Rider and Horse Illustrated; going to horse camp in the summer; browsing different halters at Pet Smart and assuring the sales clerk that, as a 12-year-old living in the suburbs, a pony was “definitely in my near future.”

It feels like destiny, then, that I ended up in Andalusia, a place that celebrates horses as much as a good glass of sherry on a warm, sunny day. And one of the best times to showcase these trusty steeds is at the Feria.
If you’ve never heard of this festival, Feria is the true herald of the summertime, a celebration of all of the carefree, colorful, and reckless fervor of the season. Feria, Spanish for “fair,” happens throughout all the major cities in Southern Spain from April to September.

It wasn’t until my third time at a Feria that one of my long-standing dreams came true: ride a horse in a flamenco dress.

My cousin and her friend had just arrived in Córdoba and we walked to the fairgrounds to take in the sights. Ten minutes after strolling down the crowded dirt paths, we came across an older gentleman on horseback. He called out and asked for one of us to take a picture of him on his stallion. After I took the photo and handed him back his phone, he flipped through the images and gave a satisfied grunt. He slipped the phone back into his pocket and looked down at me.

From the first time I experienced a Feria, I was captivated by the gorgeous women sitting regally behind the dashing jinetes (horsemen), surveying the fairgrounds like queens. Each time they passed, you couldn’t help but stare.

So what do you think I said?

With the help of this horseman’s assistant, Antonio, I was launched into the air and onto the back of this giant, fully grown stallion.

The first thing I realized was that I did not have a saddle; I had a little square cushion. It’s basically impossible to sit astride a horse in a flamenco dress, so the women sit side saddle. What I found out that day was there is no saddle. You’re sitting on the back of this horse like it’s a family room ottoman.

A mere 30 seconds after I had sat down, the Stallion took a nervous shuffle step and I felt myself slipping off the cushion and I swear to you, I saw my life flash before my eyes. I clutched the man’s torso and tried to stay calm.

“I’m Diego,” he informed me, as I clung to him. I guess he figured I should know his name before I plummeted to the dusty ground. “Sit straight and cross your legs so you don’t kick him. If you do, we’ll go flying!”

It wasn’t exactly as elegant as what I had envisioned, but hey, at least I was on a horse in a flamenco dress, right?

Diego nudged the horse forward and off we went, parading down the golden dirt paths. Once I steadied myself, I began to actually look around and enjoy what was happening. People stopped and stared; tourists snapped photos; a little girl in her mother’s arms pointed at us and smiled. I held my head high, smiled back and felt every bit a queen as the beautiful cordobés women around me.

Other men and women on horseback trotted by us, tipping their hats and calling out hello. Unsurprisingly, all of the equestrians in the Feria know each other and I felt as if I’d been let into an exclusive society.

We passed two young men reclining in a cart, their pom-pom festooned horses dozing off in front of them.

“Chavales – you’re not going to talk to any girls by just sitting there!” Diego shouted while we paraded by. The two guys nudged each other and laughed good-heartedly. Then he added, “I’ve got this little blue-eyed American with me!”

“I’ve been married three times,” he barked in a self-confident timbre, worn raspy by years of good cigars. “Now I just have girlfriends.” Diego regaled me with his prowess with the ladies for a few more minutes, and then finally told me the motivation for his generosity.

He told me he taking me to meet his son, Diego. Diego was older, successful, and of course, guapo.

“Oh… great,” I answered. What was I going to say? It’s not like I could easily walk away.

Diego was so delighted by this matchmaking opportunity, he started telling all of his fellow jinetes.

“Oye, Pepe,” he called to a passing horseman. “I’m taking this American to meet Diego!”

Pepe laughed and smiled at me, his eyes seeming to say, oh classic Diego.

We finally arrived at our destination where my future true love waited. Young Diego was was busy petting a horse and talking to two beautiful women while I gracefully flopped down from the Stallion’s back.

Diego introduced me to Young Diego, who looked about as awkward as I felt in that moment. Needless to say, it wasn’t love at first sight.

I thanked Diego for the ride, said goodbye to Young Diego (who was already back to the women and horse), and walked away.

While I may not have found love that day, my inner horse girl and honorary flamenca self rejoiced and I counted that day as a win.