Despite the sweeping natural beauty, fascinating history, and cool music scene, Iceland made it onto my childhood “Places I Want to Visit as of 2007” list for one reason only: horses.

My great and unashamed love for my equine friends has been well-documented on this blog, so it should come as no surprise that even as an adult, meeting an Icelandic horse was a major draw for visiting the rugged island in the North.

I poured over horse-back riding tours, called “horse rentals,” for hours, trying to find the perfect experience to live up to my teenage expectations. I checked blogs, Google searches, TripAdvisor, and online articles and what I found nearly identical horse farms with similar 4 to 5-star ratings. Eventually, we settled on the Red Lava Tour at Solhestar, a “horse rental” about 15 minutes away from downtown Reykjavík. I was intrigued by the high ratings, the nice photos, and the slightly sketchy website.

We arrived at the barn on the morning of our tour at 10 am, just as the sun was beginning to rise. The Solhestar stable was small at the end of a long gravel road lined with other stables. We pulled into the parking lot and parked next to a Santa Claus figurine heavily taped to a lamp post.

We arrived about 10 minutes late and Solhestar was very accommodating. A young woman greeted at the door and led us into an equipment room with paddock boots, helmets, and blue drysuits.

I took one look at the blue suit and shook my head. I mean it was cold outside, but I wasn’t sure I was ready to slip into a full body heavy-duty onesie. I eventually swallowed my pride and zipped up, figuring that it was just a part of the required outfit.

The woman led us from the equipment room, through a small stable with resting horses, and into a little paddock to meet our mounts. My horse was a pretty chestnut mare with a white blaze and a lot of fluff.

Our guide explained a few riding basics – kick to go, pull back on the reins to stop – and we trotted down a dirt path to catch up with the rest of the group.

We quickly discovered that we were the only ones wearing the suits as soon as we caught up to the others, but by that time the chilly morning air had begun to settle in around us and I was grateful for that onesie.

Our interim guide handed us off to the official guide, a shy German girl, and trotted away. Without much of an introduction, she led us forward into the Rauðhólar, the Red Hills.

The sun slowly crept higher in the sky, casting a warm golden light on us as we rode into 5,000-year-old pseudocraters. It looked as if a giant had taken clumps of red clay, smashed them together, and dropped it on the ground. Ancient green lichen covered the towering maroon hills that surrounded us. 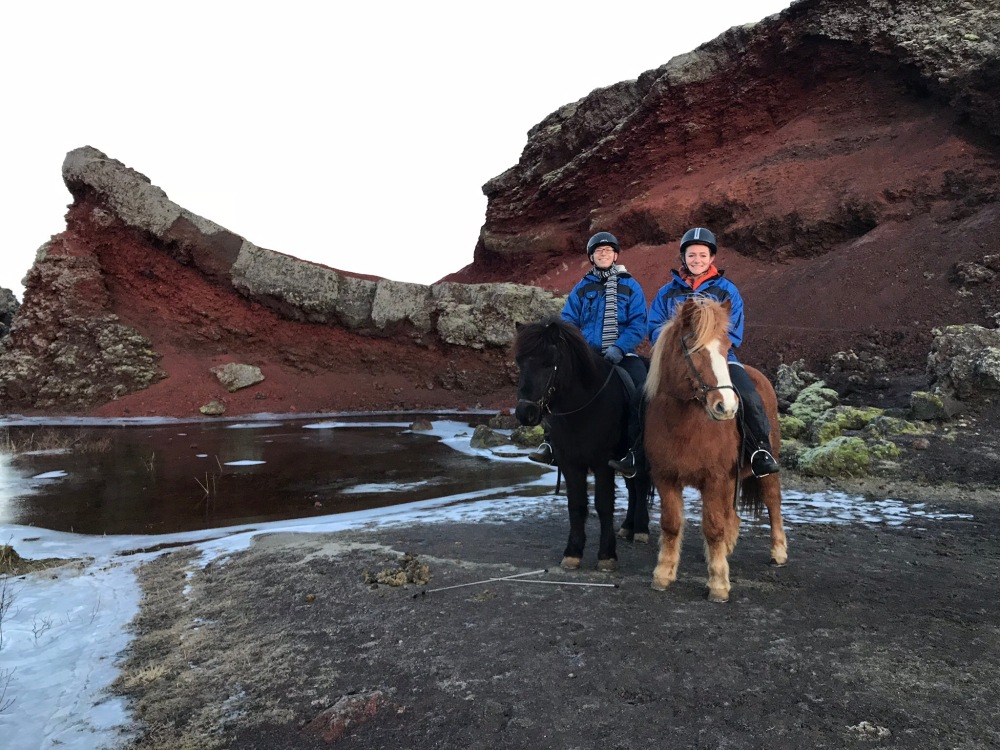 When we reached a stretch of flat land, our guide paused.

“Do you want to experience the tölt?” she asked, with little preamble.

We urged our horses forward into the tölt, which felt similar to a trot, but smoother. It felt like the horse’s steps where quicker and closer to together, creating a bouncy and staccato riding rhythm.

The horses tölted along until they got lazy and slowed to a walk. Our guide, who remained mostly silent, would occasionally stop to ask again, “Do you want to experience the tölt?”

Needless to say, we experienced the tölt many times that morning.

As we rode, the only sounds were heard were our own breathing, the crunch of the horses’ hooves on the rocks and ice, and the distant sound of the highway. Turns out that the convenience of riding 15 minutes away from downtown Reykjavik has its drawbacks. While faint, the noise from the busy road was unmistakable.

We finished up the excursion with a ride through an evergreen forest that ended abruptly behind the stable where we began. After dismounting, I gave my mare a good pat and cuddle and went inside to remove my many layers of clothing.

One of the reasons that I had chosen Solhestar was because of the hot chocolate, coffee, and conversation that was included after in the tour. On the website, the tour description claimed that the guides would hang out with us after the ride to answer questions and tell us interesting facts about Icelandic horses.

Unfortunately for us, the guides disappeared to attend to the horses and did not reappear. We sat around the table with our fellow riders, a Colombian woman and a disillusioned Australian couple on their honeymoon, and drank instant hot chocolate while we defrosted our appendages.

“Iceland can kill you,” the Australian man said miserably. “I almost fell off of a glacier yesterday.”

Hours after the ride was over, I decided that I wasn’t done with horses. We decided to drive north on Route 1 (more commonly known as the Ring Road) for a few hours and took a few right turns to get lost down an empty country road on the banks of the Hvalfjörður, a majestic fjord.

We spotted a large open field with huge herd of horses and pulled over. I stood at the edge of the fence until the herd slowly migrated toward us. Watching twenty horses curiously walk toward us in the fading daylight was truly magical. It was the perfect end to a blissful, horse-filled day.