That’s right. Spain loves Christmas so much that they even invented a verb for it–navidear, “to christmas.” Since mid-November, the Córdoba city center has been abuzz with Christmas preparations. They’ve hung decorations the city center, stores have put displays in their windows, shoppers have rushed to take advantage of discounts. And now that it’s finally December, the lights are on and ’tis the season to eat, watch out for aggressive grandmas, and sing the fat one.

I figured that Christmas in Spain would be similar to the US-presents, Santa Claus, big dinner with your family and ya está, right? Naively, I believed that we knew how to Christmas.

Allow me to elaborate on some key Christmas traditions in Spain:

Ah, the quaint, quintessential image of a European Christmas. Luckily for us they don’t just happen in Germany… Spain has them too! 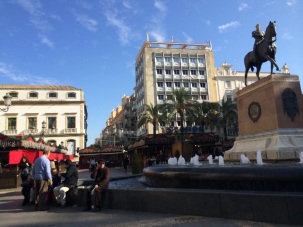 In these markets, you can buy figurines for your nativity scene (my personal favorites were the Andalusian version of Mary and Joseph, complete with a flamenco dress and suit), poinsettas for your patio, or lots and lots of food. 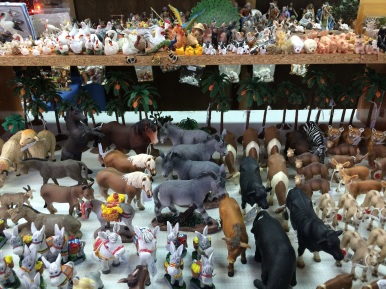 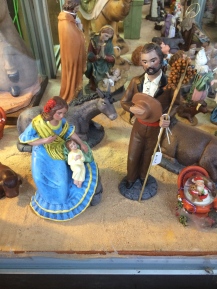 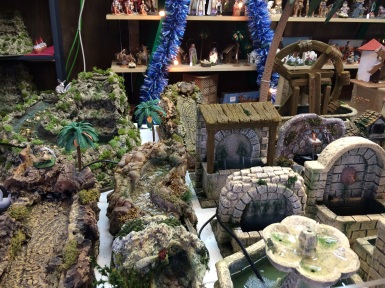 Indeed, perusing a Christmas market can be a stressful experience… do I go for the chocolate kebab made from chocolate shavings, a crepe, and whipped cream or do I buy the loaf of bread bigger than my head? Decisions, decisions. 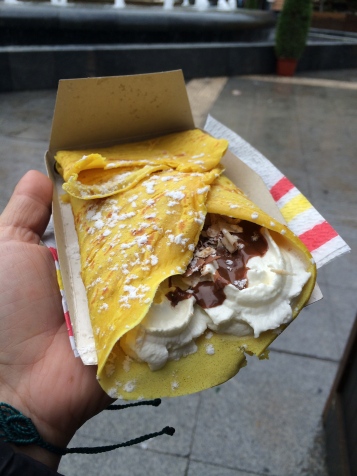 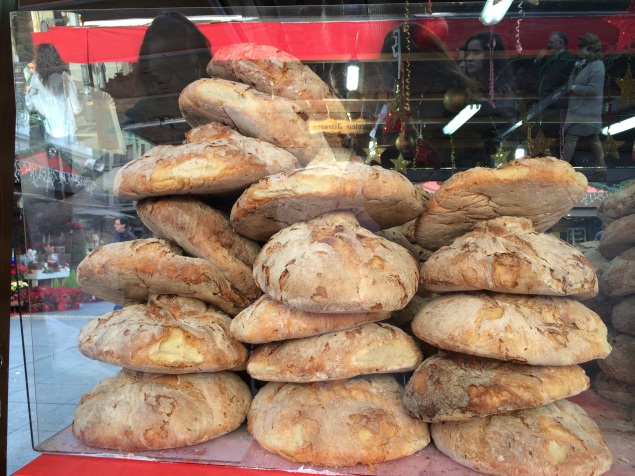 The “portal de Belén” refers to the nativity scene that is put up at Christmastime featuring baby Jesus, Mary, Joseph, and usually some sheep. These nativity scenes are everywhere–houses, churches, major plazas– all  with varying degrees of intensity. For example, depending on how serious you want your display to be, you could have a Playmobil set or a full-blown village, complete with water fountains and mini rivers.

Alright, so maybe you’re thinking that this isn’t that unusual. After all, the US doesn’t half-ass nativity scenes. I mean, there’s even a live-action, drive-through one near my house, starring real people and a real camel all outside in the middle of December. That’s dedication.

Let’s just take a look at this picture. What do you see? 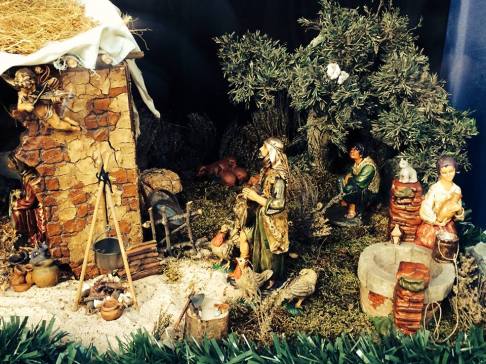 A lovely nativity scene, indeed. But take another look. What’s that in the corner? 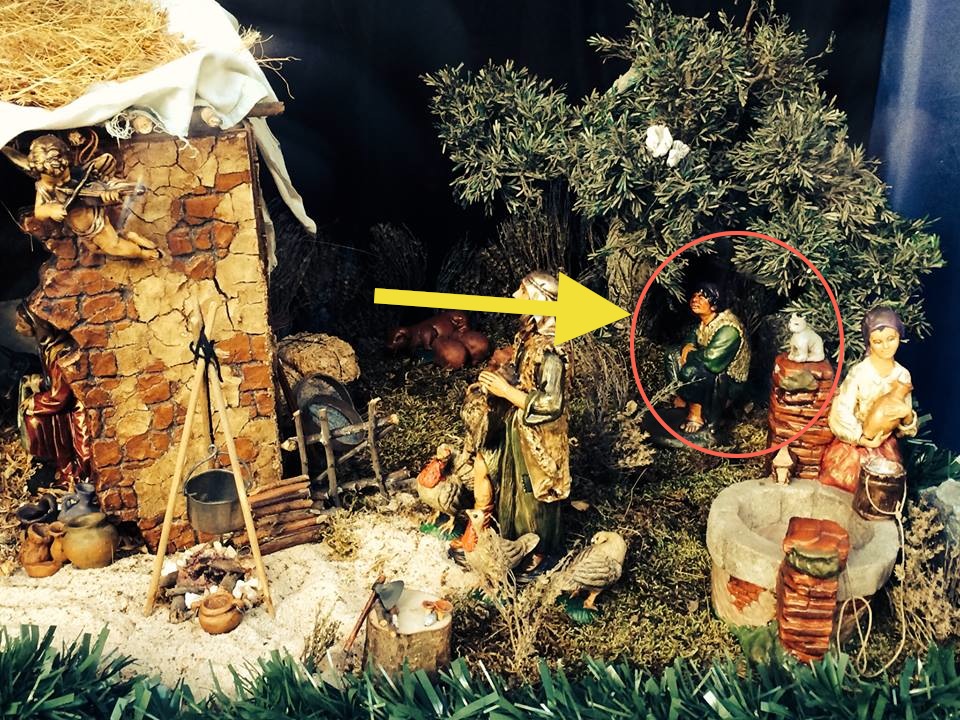 Yes. That is, in fact, a man pooping.  Pooping.

It’s called a “caganet,” and when I asked my coworkers about it, they assured me that it was a “Catalan” thing. While we may delight in finding the Elf on the Shelf, they search for the caganet in the nativity scene.

While individual apartments and houses may not get decorated with lights, the city centers go all out. I watched the workers hang the lights for a full month, pestering everyone around me for information about the grand illumination day. Definitely worth the wait. 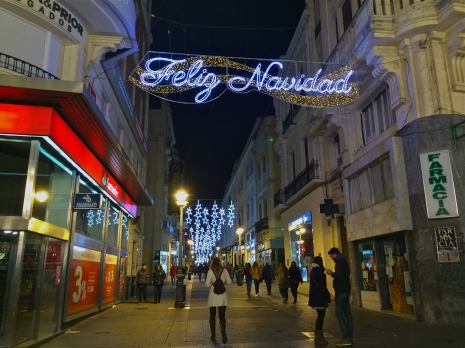 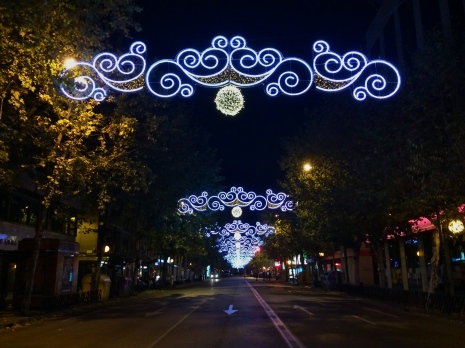 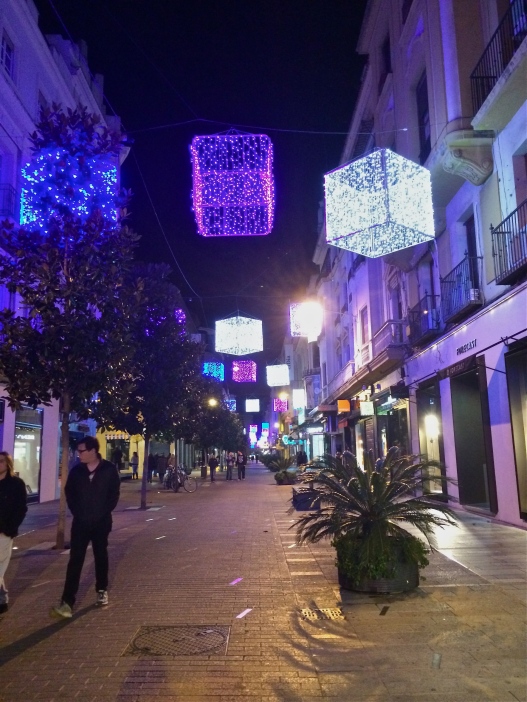 What I get a kick out of is the palm trees/orange trees strung with Christmas lights. How is this possible?! 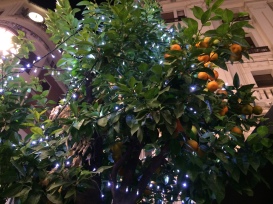 But they’re not singing carols; they’re singing numbers. These lucky youngsters are charged with the sacred task of announcing the winning numbers for the Christmas lottery. No, seriously. This actually happens.

The drawing is broadcasted on every major radio and television station and people will literally listen to it all day in hopes of hearing their number. There are many prizes, but only one giant one, appropriately called “el gordo.”

The Christmas Lottery is such a big deal that there is an actual ad campaign, complete with a 3 minute long, heart-wrenching commercial (#Justino, anyone?) that makes you believe in the Joy of Christmas while inspiring a distinct sense of FOMO. 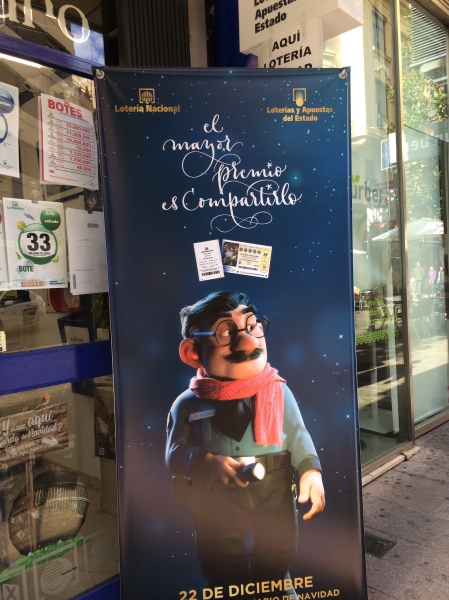 When I tell my coworkers that I didn’t buy a lottery ticket, they shake their head with pity.

“And what happens if we win the gordo? You don’t get any money.”

It seems that the Christmas Lottery is fueled less by genuine optimism and more by acute paranoia. The way it works is that you purchase a fraction of one lottery number, which is sponsored by an organization—your local bank, church, school, etc. So, if your number is called you and everyone else who purchased a part of that same number win a percentage. This means that when your colleagues start buying tickets, you feel you should too because if you don’t and the fates align, guess who’s going to be the only one showing up to work in January?

When they first started to set these up, I assumed it was just another Christmas market. Little did I know they would soon transform into full-blown midways with food stands, rides, and ice-skating rinks. (Not to mention giant flat screens displaying various Justin Bieber Christmas music videos.) 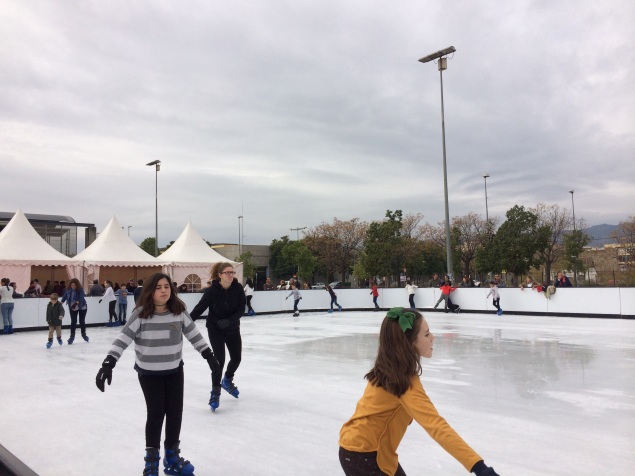 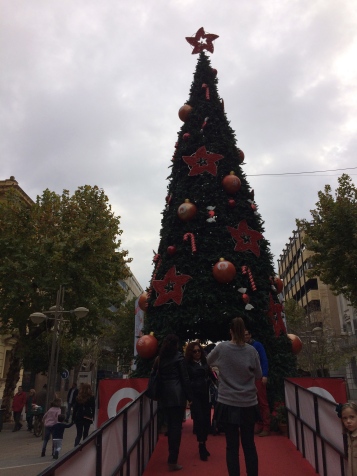 I’ll admit it, I definitely spent last Sunday strolling around, cracking up at these amusement parks. I didn’t realize that Christmas and carnivals go together so well but they do. I mean, where else could you use your high-flying, Santa tilt-a-whirl that manages to both terrify and delight at the same time? 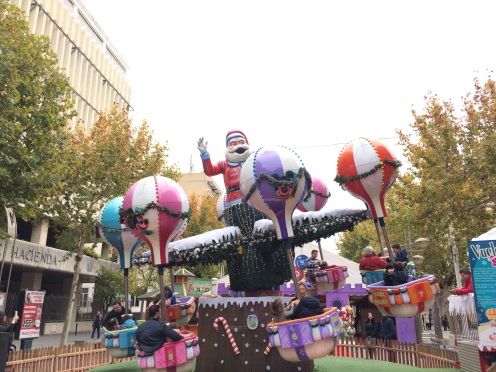 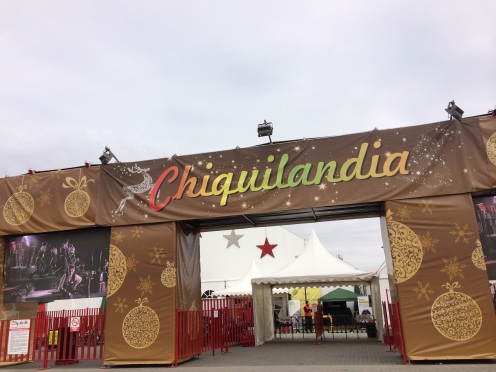 Unless you’re a Christian, you may very well have no idea who these individuals are. As the story goes, the three kings saw the star that appeared when Jesus was born and followed it to Bethlehem, bringing gold, frankincense, and myrrh (does anyone know what that even is?). Allegedly, the three kings arrived in Bethlehem about two weeks after Jesus was born, so on the morning of January 6th, Spanish children open their presents.

The night before, kids set out cookies for the kings and water for the camels. They’ve traveled a long way, after all.

Only in recent years has Santa Claus arrived to Spain. I’d say the average Spanish family celebrates just the three kings and a few lucky kids get both.

The day before there is a giant parade in every major city in Spain called the cabalgata. I have been told by not one, but multiple people that I need to watch out for the cabalgata; and the one thing more dangerous than flying candy is the aggressive grandmas that will literally shove you over trying to pick it up off the ground. I’m probably going to bring a helmet when I go…

(Honestly, this looks more like a fancy circus procession than a parade. Those floats are works of art!)

I hope you enjoyed learning about Spanish Christmas traditions as much as I did!