Gibraltar is a bizarre place. It is referred to as a “British Overseas Territory,” because “colony” just doesn’t the same ring to it. Gibraltar sits at the very tip of Europe, a lone English rock in the midst of the Spanish sea (and the Mediterranean sea).

To get to this Anglo-Saxon oasis you must take a bus first to Algeciras, a port city on the edge of Spain, and then take another bus to La Linea, the town adjacent to Gibraltar. After passing through immigration (where our passports were NOT stamped!) and crossing a live air field, we walked into the famous territory.

The city is composed of a hodgepog of quaint British architecture, practical concrete blocks, and ancient stone tunnels and walls. We were quickly disappointed at the lack of accent we heard from the people around us. Everyone was speaking in Spanish! Wasn’t this supposed to be a part of Britain?

Our worries vanished, however, when we heard a woman yelling in a wonderful British accent at her English bulldog as she tried to drag him down the street, “Nelson! You’re being lazy!” Hail Britannia!

We rode the rickety and somewhat terrifying cable car up the side of the rock of Gibraltar, watching the land fall out from beneath us and open up into an incredible vista of ports, blue mountains, and colorful rooftops. 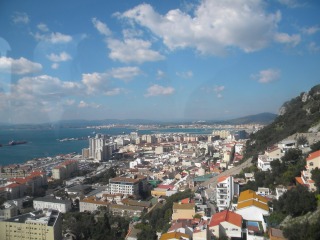 When we reached the top, someone spotted an infamous Barbary macaque, a breed of monkey unique to only the rock of Gibraltar. It sat, nestled in the boughs of a tree, its beige fur waving majestically in the perpetual wind that buffets the top of the mountain. Even from a distance, I could see that it was pure evil.

The cable car erupted in excitement as everyone clamored to take a picture of the trip’s first monkey.

But the eagerness was quelled when the cable car man paused before unlocking the doors.

“Be careful of the monkeys,” he said wisely. “I’m not trying to scare you, but they’re still wild. And dangerous.” He didn’t have to tell me twice.

Which brings me to the survival guide portion of today’s post: Klepto Monkeys

Here are some nuggets of advice to assure that your trip to Gibraltar doesn’t go horribly wrong!

Monkeys aside, the view from the top of the rock is breath-taking. It feels like you can see everything–La Linea, Algeciras, Morocco, La Costa del Sol, the rolling mountains of southern Spain. It makes me think, how must the people have felt, when they first found this towering landform and then reached its summit? Like a ruler of the world.

The Mediterranean sea rolls out to the east of the peninsula, like a lapis lazuli blanket dotted with cargo ships and sailboats. If you look straight down the harrowing cliff at the beach, you can see even more colors in the water as the sea bed grows shallower. I feel as if I can just stand here for hours, taking in the glorious sight around me. Seagulls float on the strong drafts of wind that sail up the side of the rock, merely shifting their wings to take off into another direction. This is my favorite thing from Gibraltar–the birds. In this moment, I wish I could be a bird, and fly on the salty breezes without a care in the world.

Instead of taking the cable car all the way down, we spot a precarious set of stone stairs that almost vertically descend the mountain. Who needs transportation? It turned out to be a great idea…the view was amazing and it was good exercise; that is, until, our calves started to ache from the 86 degree slope. We caught the lift at the mid-way station, where we had to wait for five minutes on a petrifying platform that stuck straight off the side of the mountain.

When we made it back down to the town and after some extreme bus catching, found ourselves back in Sevilla.